Connecting the Dots: Our Schools Today

Look for these icons throughout our units...

Document the Story: Engage in our posts, or get out in our community and show us what you see on Instagram. Tag us @ourstorynola.

US Context: What is going on in the United States that impacts the events we are learning about?

Use Your Voice: Participate in the discussion on FlipGrid. (Registered users only.)

We started our journey together before the Civil War when a former enslaved woman named Marie Couvent donated land to create the first school for Black children in New Orleans. In Unit 2, we saw the battle for facilities and the Black community rally together to pool resources to ensure Black children could attend school.  In the last unit, we learned about school integration, the resilience of the first Black children to integrate schools and the resistance of many White people to this progress.

U4.Q1: Before you start this unit, think back to Units 1-3. What themes have you noticed across all of the units? What (if anything) has surprised you so far?

We have reached present day, where we see the results of a system crafted to maintain separate classes based on race in both our schools and city. First, we look at data illustrating racial inequities across our city and schools. We end with a bright spot, one of example among many, of Black excellence in our city. Remember to use your voice on FlipGrid. If you aren't registered with us, you can join the dialogue on Instagram @ourstorynola. Let's get started.

The evidence of the history of racial inequity are present throughout New Orleans. Disparities exist across virtually every indicator of wealth and economic well-being in New Orleans. The unemployment rate of households of color in New Orleans is three times more than the rate for White households. Families of color are far more likely to live in poverty than White families. Home-ownership is much lower amongst people of color. Those people of color who do own their home have significantly lower property values than the White home owners (Prosperity Now, 2016).

U4.Q2: Examine the infographics above and connect the dots. How does content from Units 1-3 explain today's racial inequity?

More than sixty years after the Leona Tate, Tessie Prevost, and Gail Etiénne first walked through the doors of McDonogh 19, New Orleans schools are far from integrated. Despite making up 21% of children under the age of 20, White students make up only 9% of the population of the city's open enrollment public schools (New Orleans Equity Index, 2017). The highest ranked private high schools have overwhelmingly White student bodies compared to the demographic breakdown of the city as a whole (Private School Review, 2021). 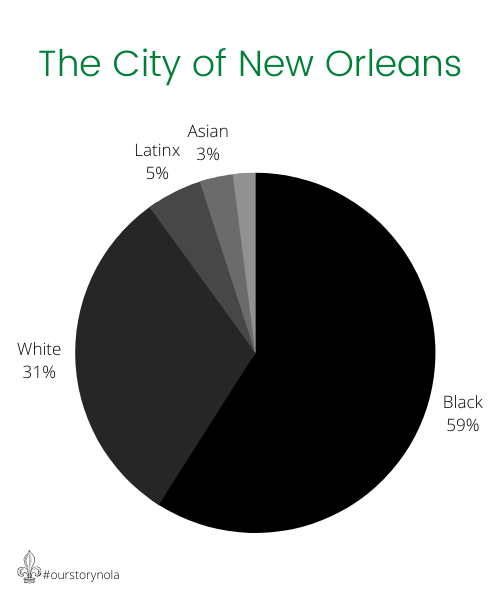 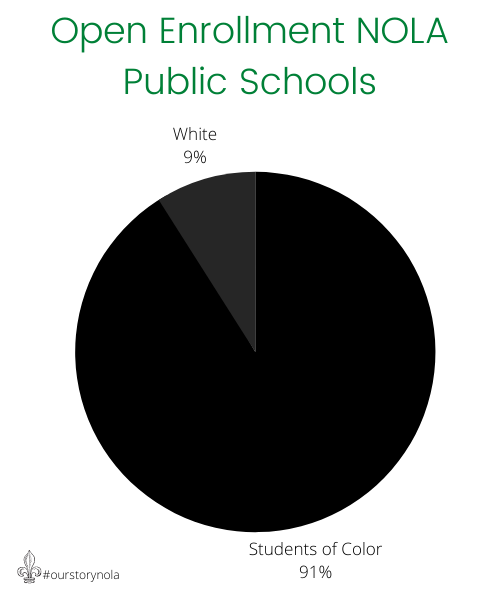 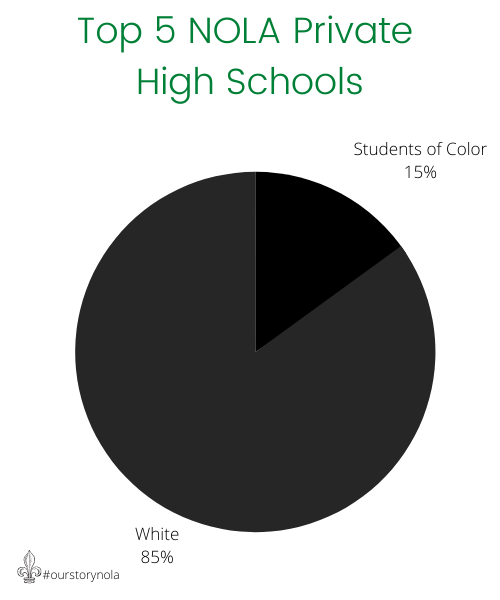 This inequity did not happen by chance. It was carefully constructed by multiple parties, both public and private, working in concert to support White Supremacy. This is the result of what we have learned about together over the last three units.

U4.Q3: First, how do you react to this data? Do you find it to be problematic? Next, connect the dots. Use information from Units 1-3 to explain today's racial composition of schools.

In Units 1-3, we have seen examples of Black New Orleanians rising up together to create opportunity for advancement in the face of racism and adversity. In Unit 3 we learned about the creation of the Desire neighborhood, built with the intention of geographically separating Black New Orleanians from the rest of the city. The original intention of a "learning village" for thousands of Black children in the city included George Washington Carver Senior High School opened in 1961.

Through much of the 1970s, public schools in New Orleans built strong communities leading to high school alumni groups full of pride for their alma maters. However, steady population decline and continued flight by middle class families from public schools led to lower enrollment, which reduced state funding, and contributed to financial difficulties in the school district. In 2001, Carver's school performance score, a combination of test results, graduation rates, and other factors, was only a 14 on a 200 point scale (Vanacore, 2012). By 2005, only 56% of students in New Orleans public schools, graduated from high school, representing one of the lowest graduation rates in the country (Harris, 2020).

Following Hurricane Katrina, the state-run Recovery School District included only one 9th Ward high school in its first master plan for building construction. Carver alumni solicited a petition of signatures across town, demanding that the state chose a site on Higgins Boulevard. They broke ground in 2014 and the new state of the art building is now home to a new chapter of Carver Rams.

The building may be new, but the history of the Carver legacy remains for students: “Sometimes as I walk the halls, I get a feeling of our Carver roots,” Ashlee Brown, a senior with a 4.0 GPA. “The building where they studied is gone, but I can still feel them with us” (Reckdahl, 2019).

Students can also feel proud about the recent success of the school. Though students enter 9th grade an average of 3-4 years behind in reading level, the school maintains a high bar for expectations and follows through with a committed staff of over 100 people. “Regardless of where you are academically when you arrive… We strive to set you to compete against anyone in the country.” This approach pays off. In 2019, 98% of Carver seniors were accepted to college, the highest college acceptance rate in the school’s history (Reckdahl, 2019).

U4.Q4: Connect the dots. Starting with the creation of the Desire neighborhood in Unit 3, tell the story of Carver High School.

“Being a Carver ram is something students take great pride and joy in... Regardless of where you are academically when you arrive… We strive to set you to compete against anyone in the country.”

So what are you going to do about it?

It’s easy to look at history like it’s something distant and disparate from our lives. It’s tempting to look at people with pity, disdain, or admiration when we learn about them as ‘historical figures.’ But the truth is, that this story is still going on, and we are all a part of it. I encourage you to examine your own position in our city.

1. What will you personally do to make our community and our schools more equitable? Dig deep. Be specific.

2. Schools across the country are about to get an unprecedented influx of billions of dollars to stimulate recovery following the COVID-19 crisis. Many are calling for schools to use these funds to create a new normal that is more equitable for all students. How do you think New Orleans should allocate the money? What specific recommendations do you have to make our schools and city more equitable? Again, dig deep. Be specific.