Look for these icons throughout our units...

Document the Story: Engage in our posts, or get out in our community and show us what you see on Instagram. Tag us @ourstorynola.

US Context: What is going on in the United States that impacts the events we are learning about?

Use Your Voice: Participate in the discussion on FlipGrid. (Registered users only.)

In the last unit we learned about Marie Couvent and the fight for schools for free people of color. After many white New Orleanians fought to keep black people out of schools, the Civil War ended, abolishing slavery and establishing citizenship and suffrage for black men. We ended Unit 1 on a relatively high note during Reconstruction: black people held public office, there were some successful integrated schools and neighborhoods. But when the Compromise of 1877 ended Reconstruction, federal troops left the former Confederate States, including Louisiana, and everything went back to local control. That’s where we pick up our story…

In this unit, you’ll learn that even though black New Orleans were legally citizens, many white people, especially those in power, clung to the idea that white people alone were entitled to public schools. New Orleans businessmen, real estate developers, and pretty much every level of government worked together to divide neighborhoods on racial lines, in some cases literally tearing down portions of neighborhoods that were black. We often think of racism as a face-to-face encounter, using slurs or hate speech, but many people have unintentionally been a part of systemic racism in our city and country.... Probably even people you know.... Maybe even you.

U2.EQ: As you complete this module, think about this essential question: "History repeats itself, but in such a cunning disguise that we never detect the resemblance until damage is done." How did white supremacy disguise itself in the battle for New Orleans schools during this time period? What was/is the resulting damage?

We're moving discussion over to Instagram to improve accessibility. Even if you haven't registered, you can join the dialogue @ourstorynola. Let's get started.

The End of Reconstruction: Moving Backwards

US Context: The Compromise of 1877 marked the end of Reconstruction and the withdrawal of federal troops from the former Confederate states.

The end of Reconstruction meant the return to local control in Louisiana. Racial segregation was immediately reinstated in New Orleans public schools. The school district assigned a racial designation for every school in 1877. The new school board cut funding for public schools by 40%, and Louisiana’s new constitution restricted the city’s ability to levee new taxes. While the budget for public schools dropped by a third from 1858-1880s, enrollment doubled. The children of many affluent white New Orleanians attended private schools, leaving middle and working class whites and blacks to compete over the city’s limited resources (Stern, 2018). 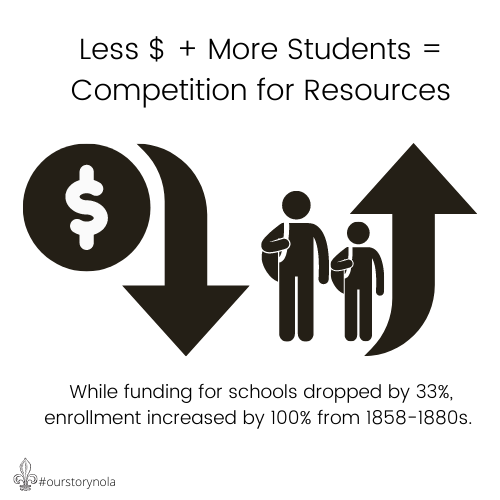 U2.Q1: Imagine this happened at your school today. How would your experience change? Why is that important?

The Battle for School Funding

“A growing funding gap between black and white schools in the South meant that black taxpayers often paid more than they received for their children’s schools. Louisiana’s ratio of per-pupil expenditures for black versus white students, for instance, dropped from one-half to less than one-fifth between 1890 and 1910. That meant African Americans had access to less than 15 percent of the city’s schools in 1910 despite comprising more than one-quarter of its population” (Stern, 2018. p. 541).

U2.Q2: Think about the purposes of education historically for people in marginalized communities. What is the impact of these funding disparities?

US Context: The NAACP case Buchanan v. Warley (1917) based in Louisville, made it illegal to require housing segregation.

New Orleans had more students in school than ever before with less money for schools. At the same time, changes to housing policies made it illegal to require housing segregation. School Board President James Fortier saw school buildings as an opportunity, and believed the school board was the last chance to preserve the “racial integrity” of “wholly white” neighborhoods, “since they were denied the ability by law to prevent what they would otherwise bring to pass” (Stern, 2018. P. 544).

The Battle Over School Buildings

When parents of black students lobbied for another school building, Fortier argued that black students should not have access to a new building suggesting instead double sessions at the four existing black schools.

After touring one of the schools designated for black students, several other school board members witnessed as many as four students per desk in dark rooms in rented cottages. They worried about disease spreading in the school because of poor ventilation and overcrowding.

U2.Q3: Do you notice similarities between the conditions for black students in the 1920s and those today during the COVID-19 crisis?

Black New Orleanians organized several mass meetings in 1923, headed by the NAACP, the Colored Education Alliance, the National Progressive Association of Negros, parent groups, labor unions, and community members. Even white newspapers, white parent’s organizations, the Times Picayune all opposed Fortier’s plan. After rejecting Fortier’s plan, the board needed to determine where the new school would be located. Many in these groups wanted the new Joseph A. Craig School to be opened for black students, while some white residents were aggressively opposed, worrying that this would set the precedent that African Americans could “come into a white settlement and build a permanent structure.”

One white New Orleanian clearer stated his intentions: "The two principles which give us most concern are white supremacy and race segregation. While these two principles of white supremacy and race segregation must be maintained, the white race must do it…with fairness and with justice to the colored race… Put the facilities for their education in the section inhabited by them. Keep them out and segregated from the section of that inhabited by the white race."

Eventually the board voted to allow the newly constructed Craig School for black children, but immediately began construction on a replacement building in Tremé, a predominately black neighborhood that Fortier had identified as “Little Africa” (Stern, 2018, p. 550-551).

Although black New Orleanians paid taxes just as white citizens, they received fewer public services. Members of the black community often took matters into their own hands, using both their time and private spending to support black businesses, churches, and civic organizations. This resulted in a “double taxation” in which black people paid into the public system largely to fund services for whites, and then paid separately to ensure services to the black community. For example, between 1907-1910, thousands of black New Orleanians pooled together to purchase six lots in the Seventh Ward between Anette, St. Anthony, Miro, and Galvez for the construction of a public school, which became the now closed Valena C. Jones Elementary School (pictured).

U2.Q4: What is the impact of this type of double taxation on a community?

White real estate analysts attributed value to race in neighborhoods, labeling neighborhoods with predominately black schools as hazardous for investment. Many whites both locally and nationally perceived black neighborhoods as both bad for business and disposable. While the black community rallied around black-owned businesses and areas of commerce, developers and the government used these "hazardous" labels as license to literally tear down parts of the city where black commerce and residences thrived.

US Context: The stock market crash in 1929 marked the beginning of the Great Depression, the worst period of economic downturn in US history. President Franklin Delano Roosevelt’s “New Deal” was a set of federal legislation intended to stimulate the economy and included loans for Americans to buy houses.

Under the New Deal, the Federal Home Loan Bank Board had the Home Owners' Loan Corporation determine where people should be allowed to get federally backed home loans. New Orleans city officials mapped neighborhoods to determine which neighborhoods, and by extension which people, should get loans from the federal government to buy houses. Green "Type A" neighborhoods were the best for investment. Blue were "still desirable." Yellow "Type C" neighborhoods were slightly riskier. Red, "Type D" neighborhoods were determined to be "hazardous" because of their "infiltration of inharmonious racial or nationality groups" (Woodward, 2019)(Mitchell, 2018).

U2.Q5: How does access to federally backed home loans connect to building generational wealth? Do you know someone who was impacted by this program, either positively or negatively?

A Snapshot of the Impact on Our Neighborhoods...

Effects: Zoned only for private residences with single family homes or duplexes. Developers built homes which was followed by an influx of investment for infrastructure including sidewalks, drainage, etc...

Status: Labeled as "hazardous" (citing the presence of a black school)

Snap a pic at N. Claiborne Ave today. Tag us @ourstorynola, and answer: How might New Orleans be different if this corridor of black commerce still existed today?

A SNAPSHOT IN OUR COMMUNITY

The Destruction of Black Commerce

An estimated 120 black-owned businesses thrived along N. Claiborne Ave before the boulevard was demolished to build the I10 overpass.

“It ran all the family-owned black businesses away. What Magazine Street is now, Claiborne Avenue used to be like that. With all kinds of African American owned businesses, insurance companies, grocery stores, mattress companies, anything the neighborhood needed, drug stores; all that left when the interstate came along."

History repeats itself, but in such a cunning disguise that we never detect the resemblance until damage is done.

How did white supremacy disguise itself in the battle for New Orleans schools during this time period? What was the resulting damage?

Is There a Future for the Recent Past in New Orleans? (2010, December 7). MAS CONTEXT. https://www.mascontext.com/issues/8-public-winter-10/is-there-a-future-for-the-recent-past-in-new-orleans/

Kaplan-Levenson, L. (2016). The Monster: Claiborne Avenue Before And After The Interstate. Retrieved from https://www.wwno.org/post/monster-claiborne-avenue-and-after-interstate

*Background photographs by Kim Frusciante in 2021